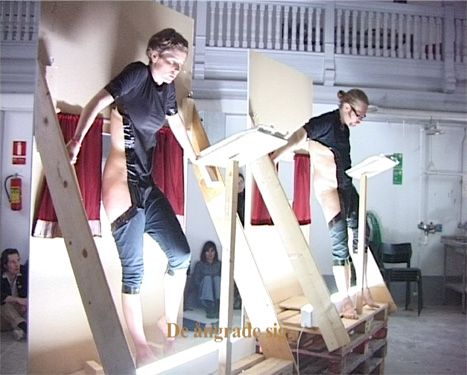 The face of the bottom is a puppet show performed by two bottoms. By isolating the bottom as a body part we will raise it to the level of being main performer in the artistic communication.  The ambition is to offer a space to that which conversation normally uses as an opposite to reflect itself in.

The face and the bottom are counter points of each other in the body and they recieve their value as organs by being comperad with teach others as opposites. The face is viewed as more positive, as a natural surface of projection in every day communication, by allowing the bottom to symbolise taboos, urges, dezires and disgust.

As much as the bottom is the backside of the face the face is the front side of the bottom and both body parts have their own languages or maybe rather dialects? If so they are both instruments in the total expression of the individual and the signals of the bottom is most commonly reduced in this to being viewed as an accompaniment to the statement being put forth by the mouth.

What becomes bottom when the bottom demands it´s right to be face?
Whithin nscenic practice and for example visual arts the idea of a mirror held up towards the spectator is often used. In the theatre for example we reflect ourselves as an audience into that which is going on at stage but the scenis and artistic mirror, in the perspective of being a language, works mostly in a positive sense; one reflects oneself (as an audience or art consumer) in the flipside so that one can experience being the front side.

That which takes part on stage therefor represents the bottom while the audience is allowed to experience being the face. Because of this the audience mostly leaves the theatre space purified, spirits raised, after having witnessed a performance. The audience has, at the theatre and in art, generally stared into a bottom and through that convinced itself it is a face. Sometimes, however, this transaction is reversed and when the audience stares into something that should be a bottom but demands the right to be a face the traditional condition for the scenic agreement is altered.

The definition of filth is something being at the wrong place like for example a shoe lying on the table. ,many times it raises irritation when things are not at the place they are expected to be and to allow space to voices not belonging to the context is therefore to be filthy. Luckily it can be said that that which at first was condemned as filth later often has turned out to be a desirable new order.

The face of the bottom is a performance about love being performed by two bottoms. The performance offers the audience the possibility to project their fantasies of romance on four isolated and demarcated buttocks. The idea is to create the possibility for the flipside to become the front side for a little while.